✅️◆Despite the wide-spread application of boronic acids in Suzuki coupling processes, 2-pyridyl boronic acids have notoriously poor reaction success due to their instability, both under storage and SMC conditions.

✅️◆In 2009, Deng, Paone and co-workers found that a stoichiometric copper additive was key in achieving high yields of 2-arylpyridines when coupling various challenging 2-heterocyclic pinacol boronates. However, for 6-substituted 2-pyridylboronates, the presence of copper was not necessary to obtain good yields. 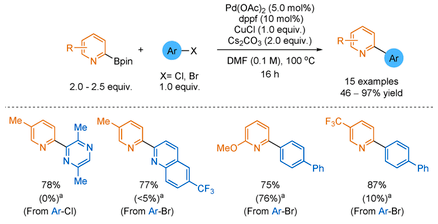 ✅️◆In 2011, Crowley and co-workers expanded the scope of this copper-assisted SMC by using S-Phos or X-Phos. This shortened the reaction times and allowed the use of less reactive aryl chlorides. A drawback is that both methodologies require stoichiometric copper and a two-fold excess of the boronate reagent to outcompete the competitive homocoupling of the 2-pyridyl species. However, commercially available boronate esters and a cheap CuI source are used. Therefore, this approach does provide a straightforward solution to poor 2-pyridyl boronate reactivity. 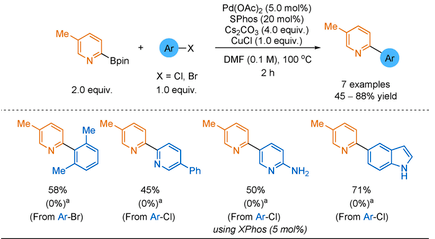 ✅️◆Concerning the role of copper, the authors postulated that the 2-pyridyl boronate species first undergoes irreversible transmetalation to give a 2-pyridyl cupratein situ. This cuprate is proposed to undergo more efficient transmetalation with the active Pd species than the parent boronate, and circumvents the potential for protodeboronation.

✅️◆In the 2016 report from Lloyd-Jones, the role of Lewis acid additives in preventing protodeboronation was extensively explored. Through NMR studies, it was observed that copper binds reversibly to the pyridine. This Cu−N coordination reduces the proportion of the key zwitterion intermediate in the reaction mixture, which is responsible for protodeboronation. The authors concluded that it is the reversible complexation of copper to the pyridyl nitrogen which attenuates protodeboronation and improves reaction success. Compared to other Lewis acids (Zn, Ag, Sr), copper additives have the greatest impact, likely as copper is more azaphilic.